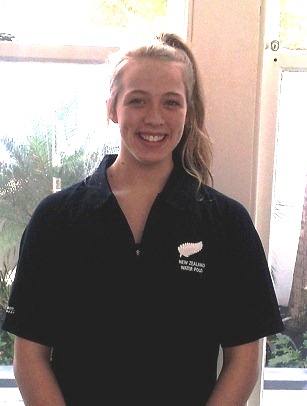 Grace Tobin, 16 (Ngāi Tahu) of Auckland, has been selected to represent New Zealand in the Fina  Women’s Youth Waterpolo World Championships to be held in Madrid, Spain at the end of August. Grace lives in Auckland, where she is a Year 12 student at Kristen School .

This championship event in Madrid will be preceded by a pre-tournament in Hungary and the team of 13 girls, aged 18 and under from all over  New Zealand, have been training for the past 18 months. They come  together for regular monthly camps, on top of their normal training and game schedules, which are fitted around their school and  university commitments.

Grace, from the Wairarapa Hume/Bradshaw whānau (with whakapapa ties to Moeraki and Puketeraki), follows other family members in being chosen to represent her country. Her mother Jeanette Tobin (nee Hume) also played Waterpolo (NZ School Girls and Women’s teams), and surf lifesaving.

Her aunt, Sylvia Sinclair (nee Hume), now living in Bath, UK, was an Olympic swimmer and  won gold at the 1986 Commonwealth Games. Her cousin, Thomas Sinclair (also 16) has been County and Western England age group champion swimmer for the past 4 years.  Grace’s late grandfather, Russell Hume, was a very successful athlete and yachtsman in his day.